An excerpt from Vanessa Van Dyke’s teaching on September 28 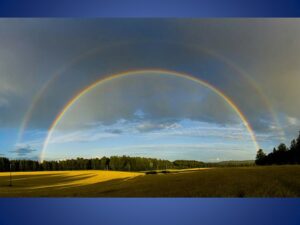 And God gave Noah a visible sign of His covenant: the rainbow. It’s a beautiful symbol, but not just for what it looks like. Now, when we think of a rainbow, we think of beautiful colored stripes in the sky. It’s another common children’s Bible story. We have our nursery at home decorated in this theme. It’s a lovely symbol from a feel-good story. My Bible translation (ESV) say God Gave Noah the sign of a bow. Just a bow. And, if you think about what the word bow would mean in Noah’s day, a bow was essential to survival and protection. It was an instrument of war. Originally, bows were made of any springy material, including bamboo as well as various types of wood, and the bowstrings were made of animal gut. The arrowhead was a piece of bone or sharp rock. When about to attack, you’d pull the flexible stick, making the arch to launch the arrow at your enemy. So the arch of the bow points to the one who will take the hit.

What God does with His bow is turn it around and make it point up to the heavens. Think about that. He’s pointing the bow at Himself, showing Noah that one day, God will take the hit of His own righteous wrath. Looking back from present day, we know that God was going to point the bow at His own Son. If we are in Christ, we don’t have to endure the wrath of God because Jesus took the hit for us. This is the goodness of God described in Romans 2, with God’s judgment comes mercy designed to lead us to repentance.